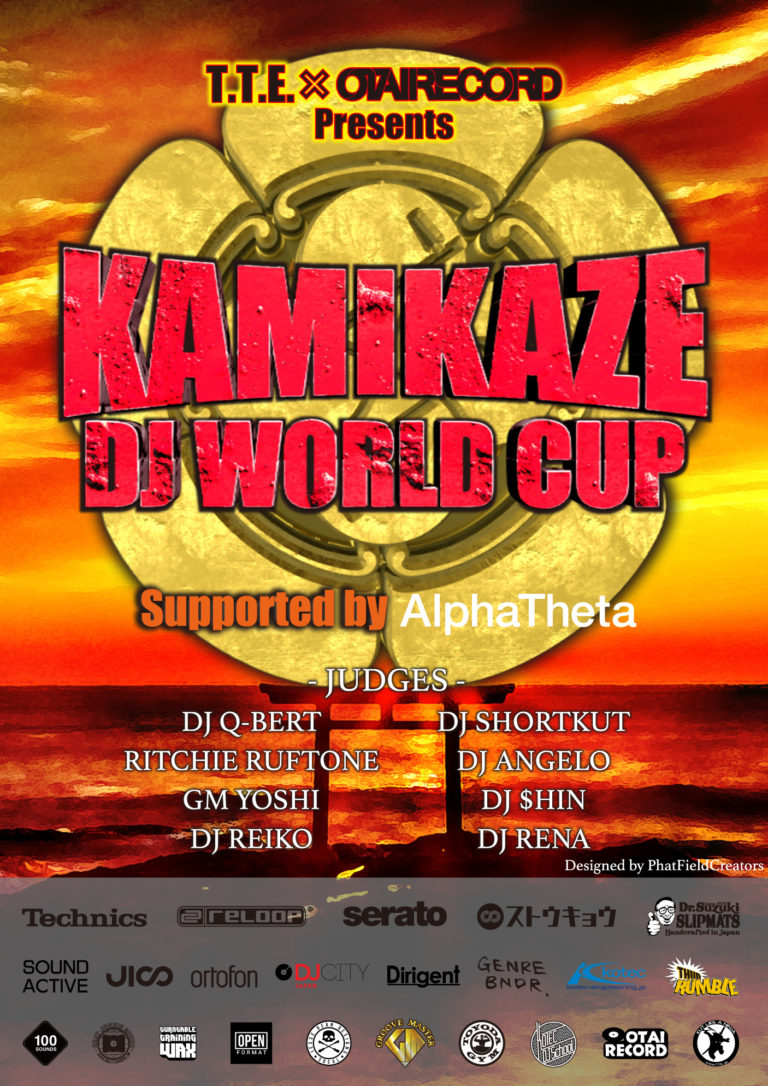 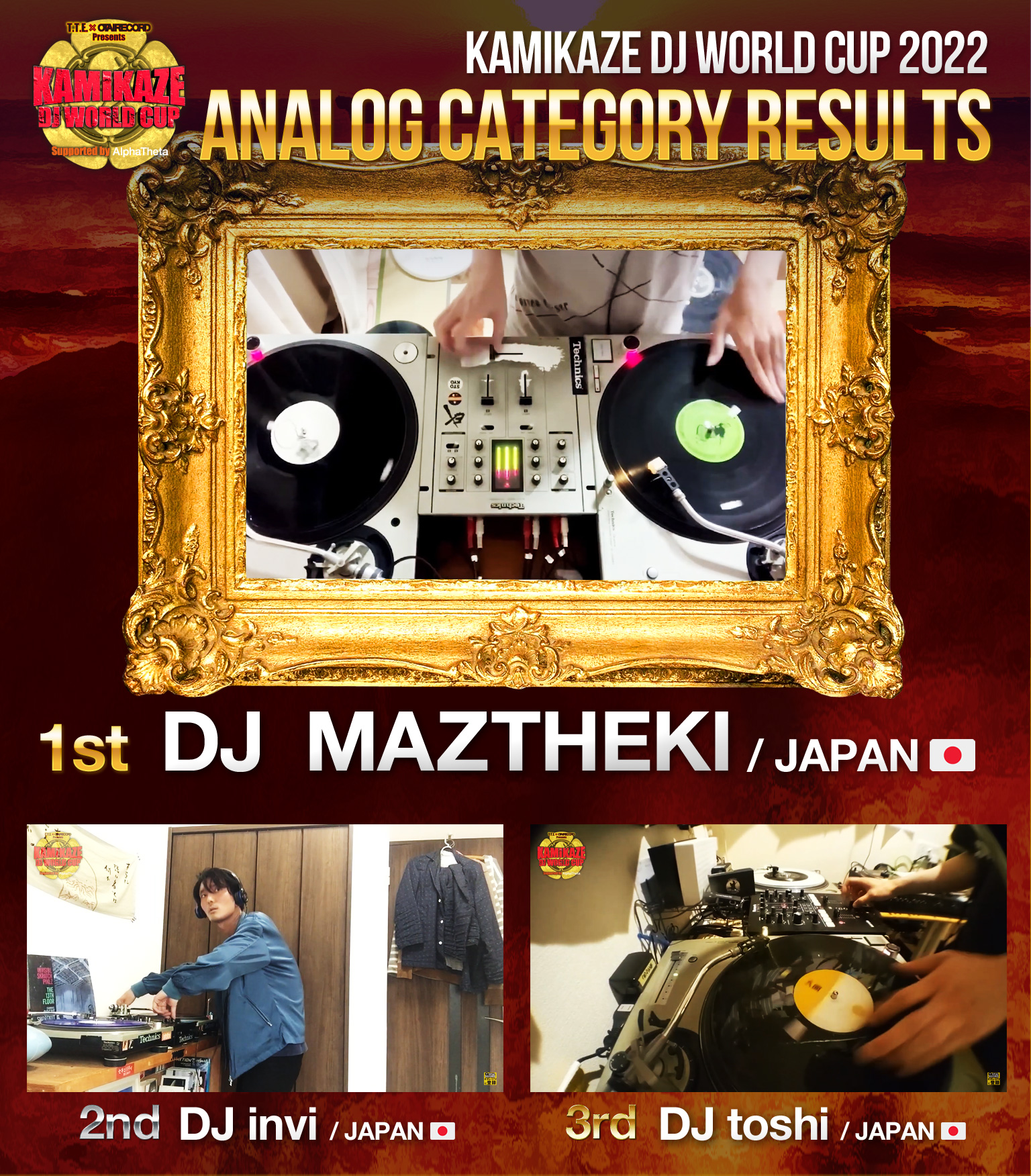 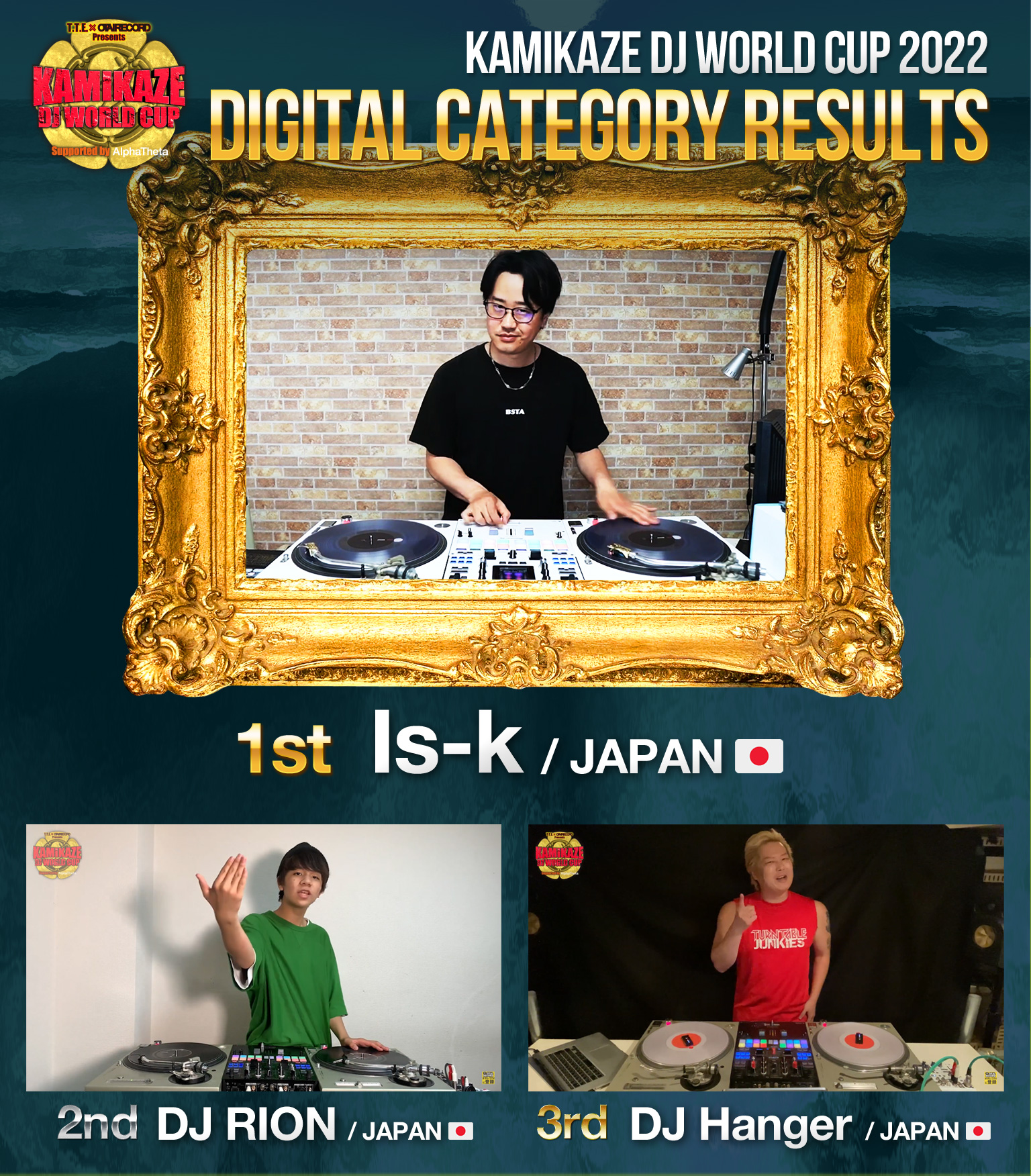 * Click the button below to watch the final round video.

* Entry closed. Thank you for all the entries. 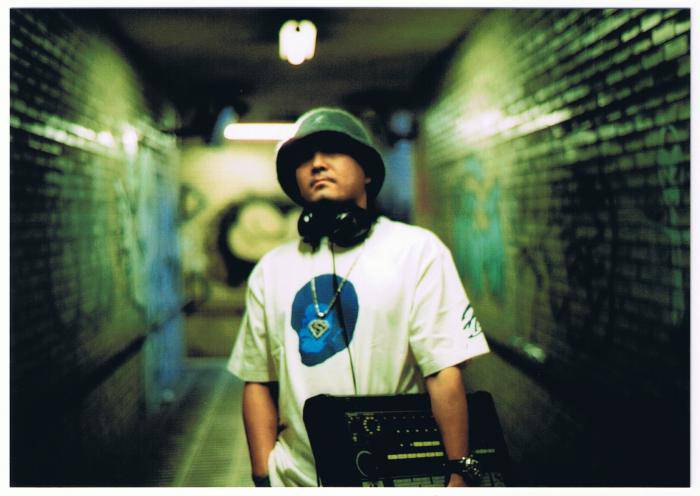 The “KAMIKAZE DJ BATTLE” has produced many star DJs in the past 10 domestic competitions.
There are official world competitions such as DMC and IDA, but unfortunately they are all from overseas.
I have been running this event for a long time with the goal of holding a world tournament originating from Japan.
In recent years, we have been forced to hold online tournaments due to the effects of Covid19,
which has hit us again and again.

However, it’s not all negative, and we have found many good things about online.
I have successfully completed two online tournaments and have gained enough experience.
I felt that it was possible to have a global tournament online.
Finally the time is now right.

I hope to make Japan the greatest DJ country in the world!
I’m going to hold a world tournament originating from Japan.

The contestants from each country will battle for the prestige of their country.
All that enter will learn and absorb the positive skill points of the other opponents, and push and excel them to the next level.
We believe that this is the best way to take the DJ scene to the next level, and that is why we are holding this tournament.

I hope it will be an exchange of turntablists from all over the world.

I am OTAIRERCORD Yosuke, the administrator of OTAIRERCORD, and I will be the tournament management DIRECTOR and support for KAMIKAZE DJ WORLD CUP.

OTAIRECORD will continue to fully support the KAMIKAZE DJ BATTLE in 2021.

This time it is the World Cup. People from all over the world will be eligible.

It would be really hard to do it in real life, but I think it is only possible online that we can do it on the world stage.

I think it would be great if we could create not only competitions but also exchanges among turntablists from all over the world.

KAMIKAZE DJ BATTLE started with 2Categories(Skratch & Solo) in 2014.
In 2014, through trial and error, it has grown to 4 Categories.

We make simple & easy to understand as it is our first world competition.

We have changed the Solo Category to

The reason for this is that I want people all over the world to still love analog records.

I want to make the rules clear and simple. 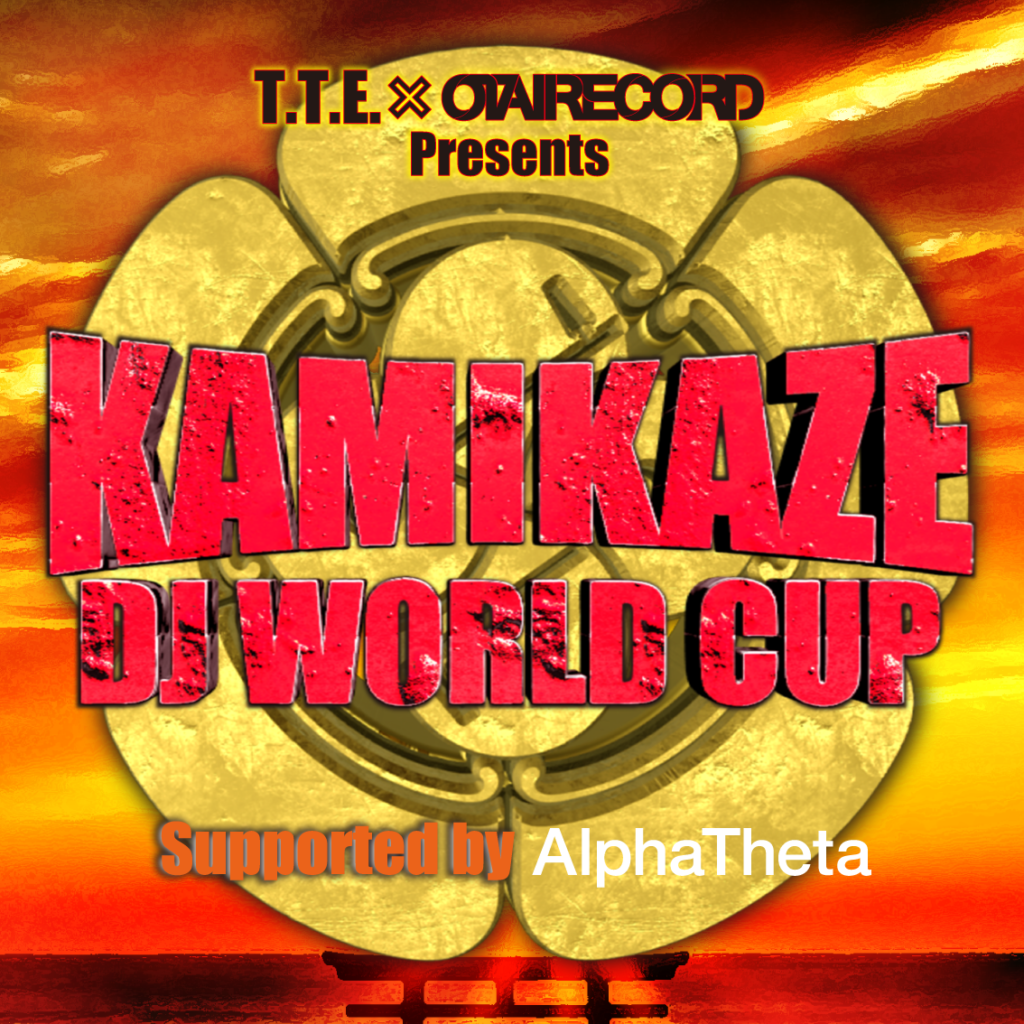 About sponsors and prizes

Prizes are currently under negotiation. Please wait a moment now. 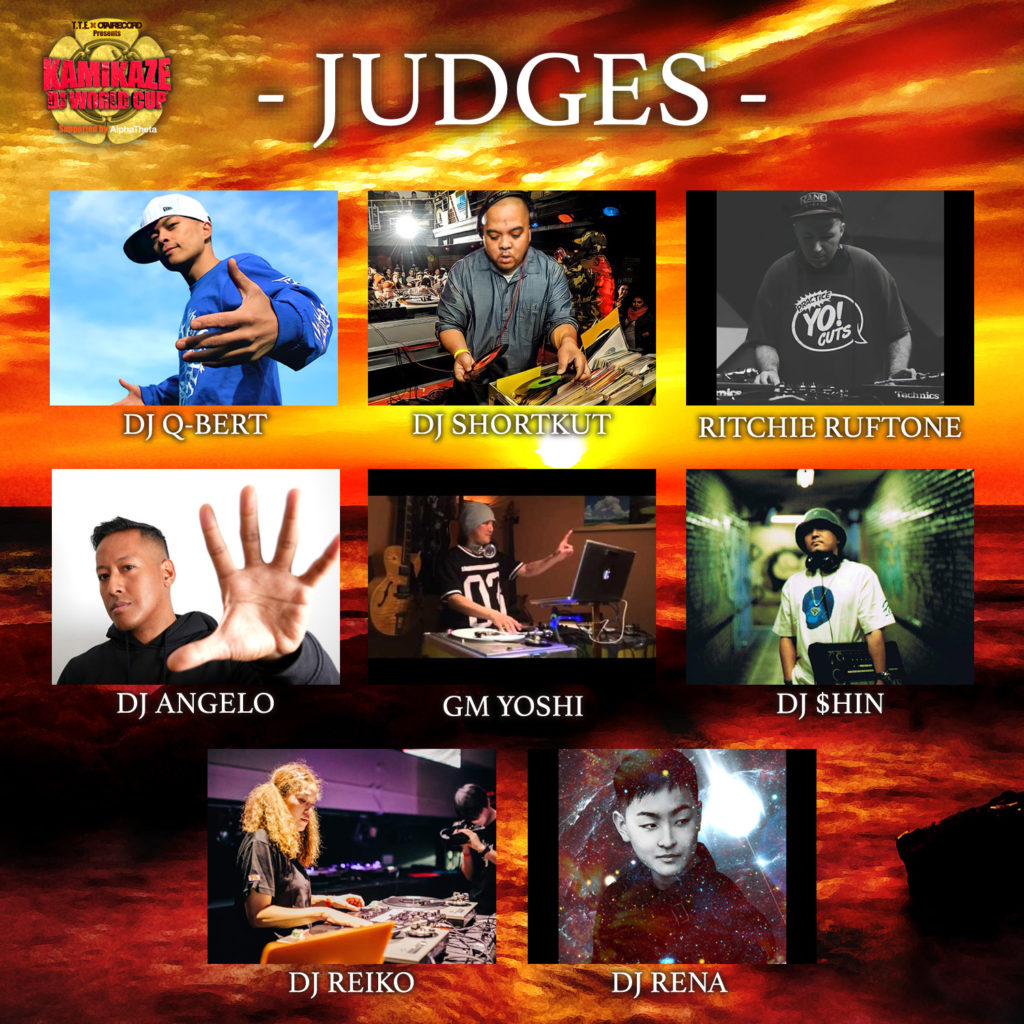 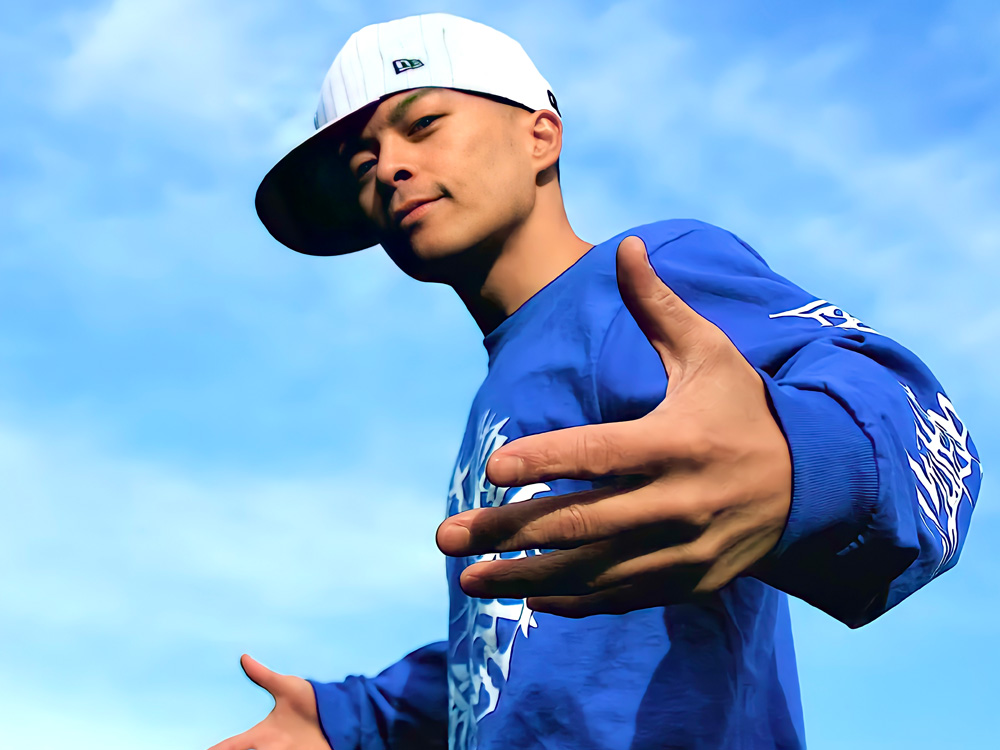 DJ QBERT is so important in the history of turntablism that it is impossible not to mention his name when talking about scratch DJs.

Throughout the 90’s, he was a core member of the legendary Invisibl Skratch Piklz, a group of turntablists who contributed to the social status of scratching and pushed the movement of turntablism worldwide.

In 2001, he released a futuristic album called “Wave Twisters” built on scratching and sampling, and the video work that accompanied the music on this album was screened at the Sundance Film Festival.

QBERT has not only toured the world as a solo and group artist, but has also held workshops and seminars to teach young DJs the joys of playing turntables as an instrument.

He is currently running an online scratch school, Skratch University, teaching turntablists all over the world how to scratch. 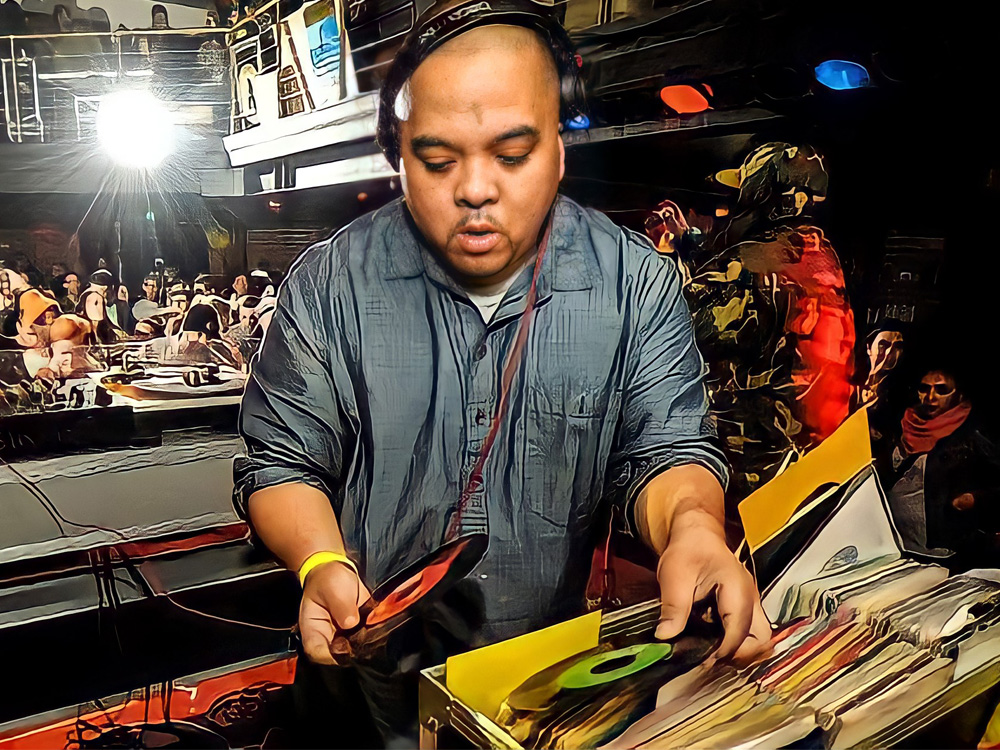 Shortcut began his career as a mobile DJ based in Daly City, California in 1987.

In 1999, Shortkut, along with Apollo and Vinrock, formed Triple Threat DJs.

His musical philosophy has exploded and is now admired by DJs around the world.

As a member of Invisibl Skratch Piklz, Beat Junkies, and Triple Threat DJs, Shortkut has made significant contributions to the DJ world, helping to develop this culture into the multi-million dollar industry that it is today. 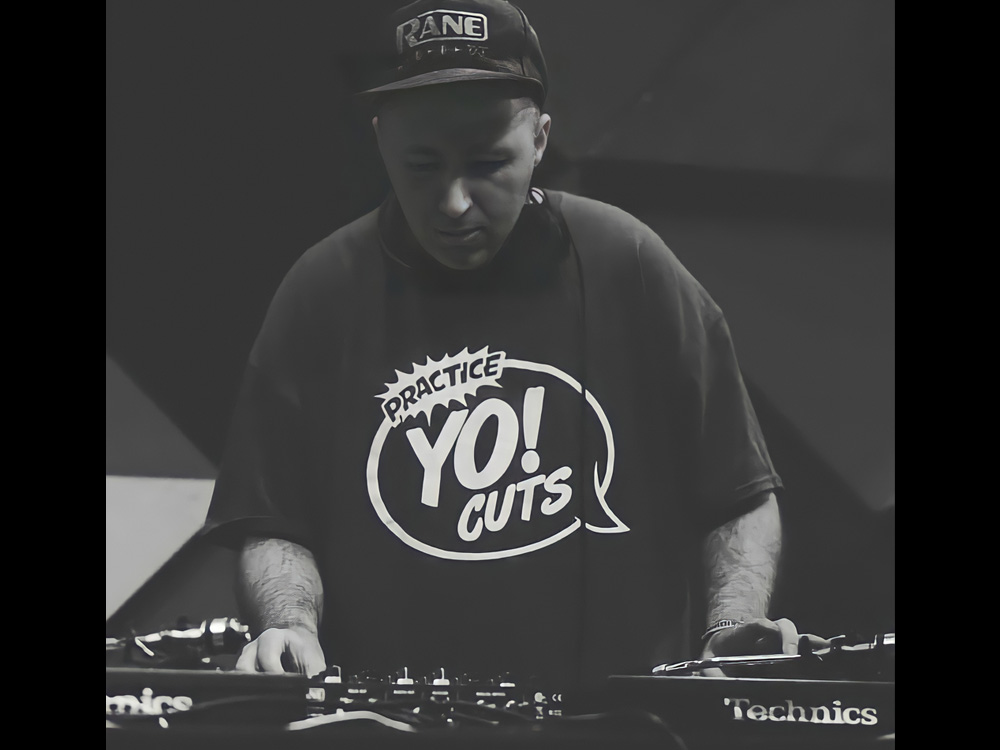 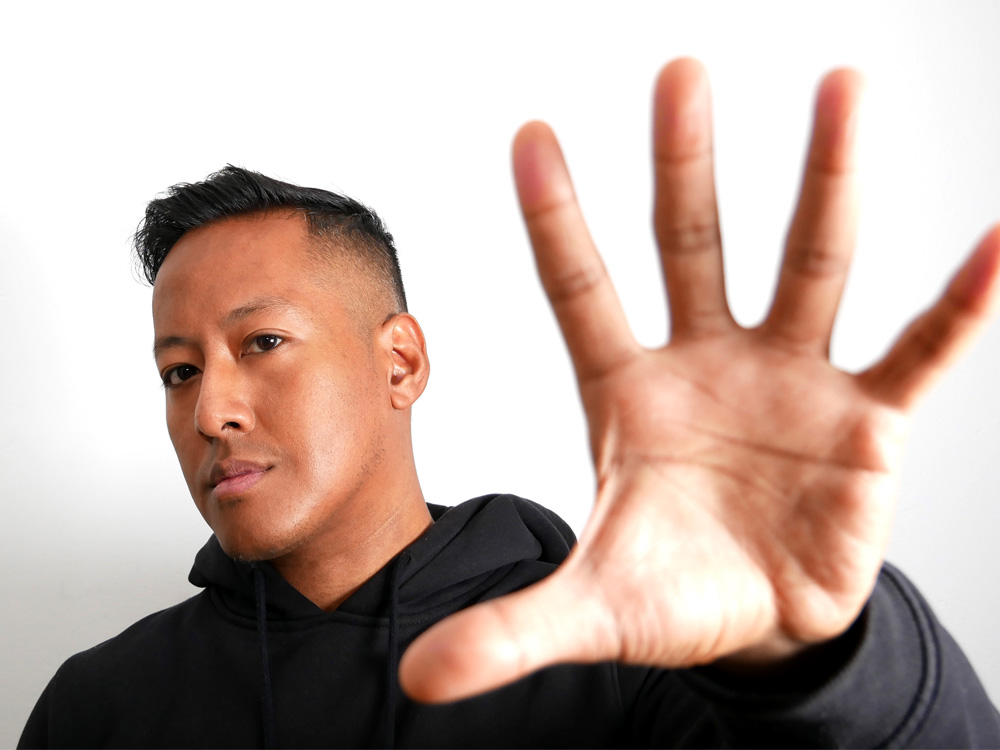 The champ is here.

In today’s oversaturated market, DJ ANGELO cuts through the DJ scene with a powerful impact!

He is multi-talented yet down to earth, multi-faceted yet focused.

He takes the art of DJing to the stratosphere and continues to push the boundaries of DJ art.

His explosive live shows have brought parties around the world to life, and as a creative director, DJ ANGELO is constantly sought after by brands in a variety of fields, not just the music world.

been used in Netflix documentaries, popular games, and visual and audio museums.

He maintains a relentless schedule, devoting his time to provide best-selling courses and master-class lessons for a new generation of DJs. 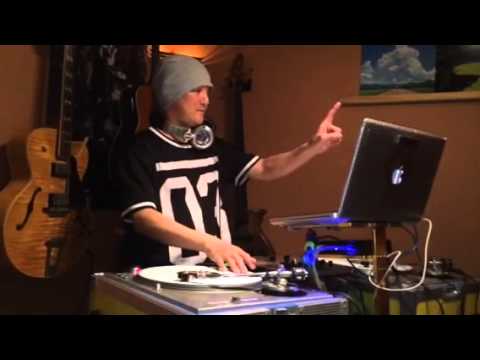 He is one of Japan’s leading DJs and scratch DJs, representative director of Office GM, and a key figure in leading the GROOVE MASTER FAMILY (GM FAMILY).

He started his career as a club DJ in the early 90’s mainly in Kansai area.

In 1991, he became the first Asian DJ to be ranked 3rd in the world at the DMC WORLD DJ CHAMPIONSHIP, a world-class DJ battle tournament, and became a pioneer in the Japanese battle DJ scene.

Since then, he has performed at numerous DJ events in Japan and around the world, appeared on TV and radio, and produced music.

GM-YOSHI has produced and released countless tracks, participated in many artists’ albums and compilation albums, and has been a guest DJ, judge, and MC for many DJ contests, DJ battles, and DMCs, making him one of the most active Japanese DJs in Japan and around the world.

He started his career as a professional DJ in 1992. He has won numerous DJ battle titles and has been the West Japan Champion four times.

In 1998, he was ranked second in Japan, and the following year, 1999, he became the first Japanese representative in the “DMC TEAM Division”.

In 2003, he started his own record label, “CREW”, which is partly named after CREW.

T.T.E. has produced a series of purely domestic battlebreaks such as “KAMIKAZE BREAKS” and “ICHIBAN BREAKS,” which every scratch DJ has used before.

They have recorded phenomenal sales in the history of battlebreaks, and are still breaking records as the most popular battlebreaks.

Since 2014, he has hosted the “KAMIKAZE DJ BATTLE” every year, discovering many new talents.

In 2018, the event took place at the Louvre Museum in Abu Dhabi, United Arab Emirates.

He also represented Japan in the Turntable Phonographic Orchestra (TSO), where he received worldwide acclaim.

He has been a DJ instructor for 25 years, and has pioneered a new path of “DJ education.

He is a pioneer of the Japanese DJ scene.

It would not be an exaggeration to say that he is a “good guy”. 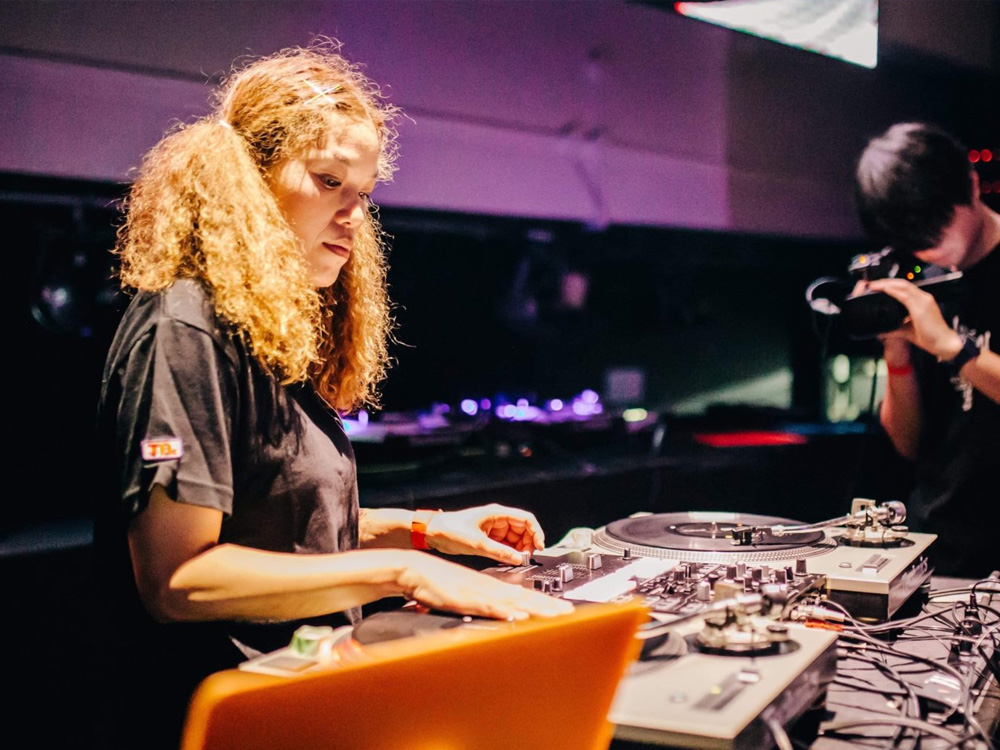 She has been active in a variety of fields, but in 2011 she joined DJ $HIN’s School in search of more possibilities as a club DJ.

In 2014, she became obsessed with scratching and beat juggling and began competing in battles.

In 2017, she won her first title in Japan (KAMIKAZE DJ BATTLE 2017), and in the same year, she became the first female finalist (single category) in the history of DMC JAPAN. 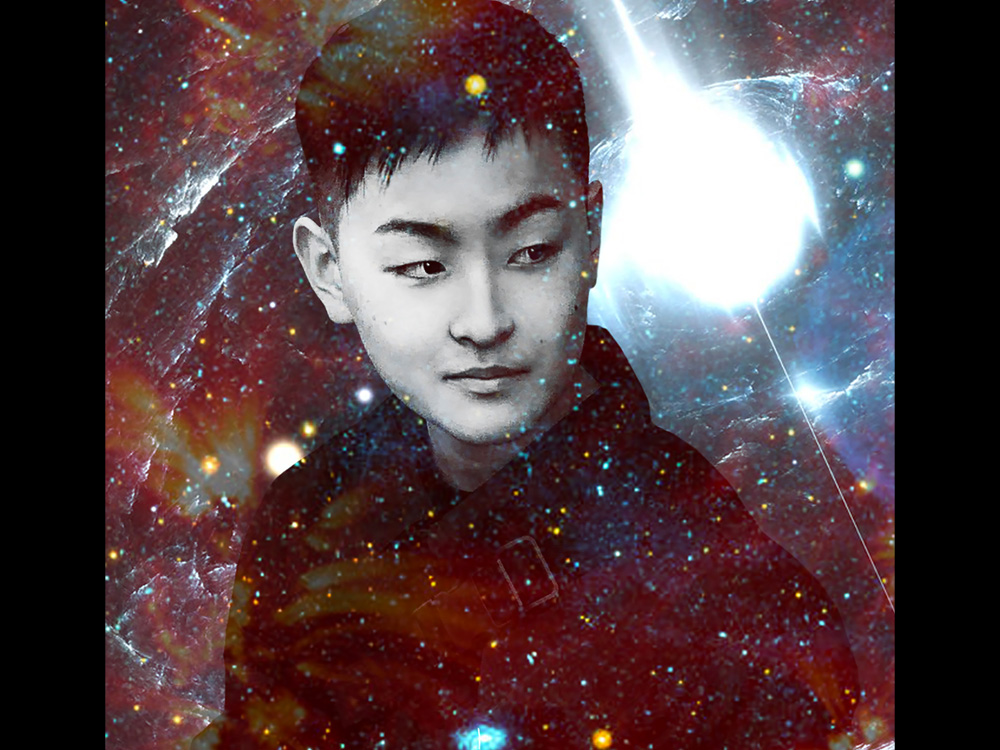 At the world’s largest DJ battle “DMC World Final” held in London in 2017, he reached the top of the world at the age of 12, the youngest age ever recorded, and the “DJ RENA (Japan)DMC World final 2017” recorded at that time has over 4.18 million views on YouTube.

Since then, he has performed at the opening ceremony of the Rugby World Cup 2019 and other big events overseas. Currently, he is expanding his range as a DJ, working on sessions with Jazz musicians and producing music, and his first EP “BATTLECOASTER” was released in October last year. 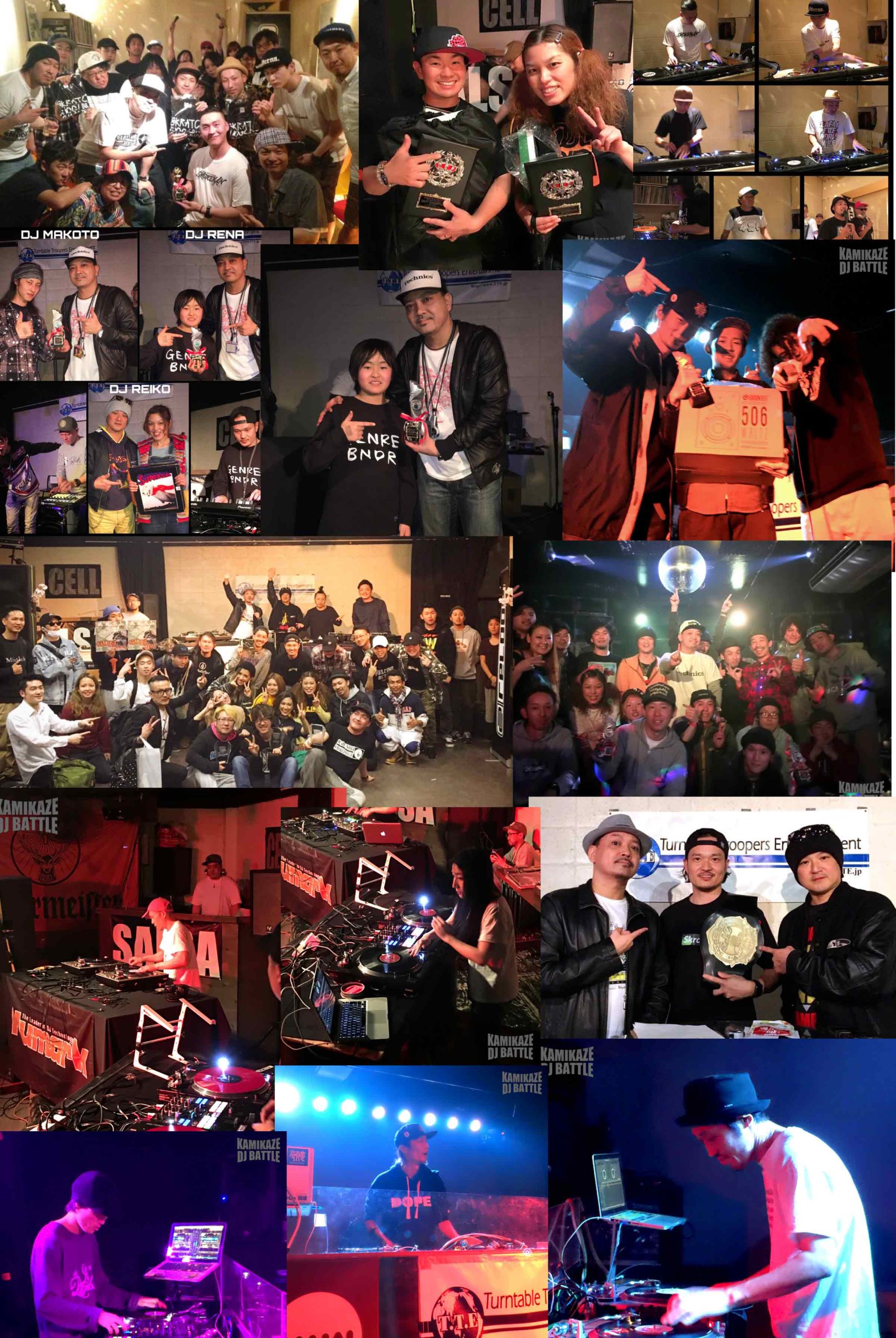 Many DJs have entered the competition over the years, creating various dramas.

It has produced many DJs in the DJ scene and has become one of the leading DJ battle tournaments in Japan.

T.T.E., which hosts KAMIKAZE DJ BATTLE, is a community centered on DJ $ HIN’s own DJ, TURNTABLE.

He is engaged in various activities such as DJ school and sound source production.
A label bearing the name of the DJ crew (Turntable Troopers) who were active in the 1990s.

Founded in 2003, the organizer of this KAMIKAZE DJ BATTLE.